Every driving day a different color

After getting my tires retorqued in Coleman I headed west, and made it as far as Cranbrook, before I decided to park for the night. It wasn’t a great campground, in the city, noisy, ambient light, friendly host, but not an ideal spot, so the next morning I left heading towards Creston. I stopped at a garage sale, where I scored a great magazine rack for $20, next… a fruit stand to stock up on fresh stuff, then north on the 3a, a windy road along the east shores of Kooteney lake. I was headed towards the Kooteney Bay ferry terminal…. eventually. My friends were going to be away until after the long weekend, so there was no hurry to get anywhere. The weather was beautiful, even if it was smoky, my head still felt like it was in a fish bowl, and exhaustion lingered – the perfect recipe for a beach break. So I stopped at Grey Creek, and checked into Cedar Grove campground for 5 days. The manager was so sweet, she gave me 5 envelopes of Emergen-C  for my cold….and it worked, by the time I left, there was no sign of my cold anywhere in my body!!! 3 weeks!!
It was still dusty, and smoky, but I had water, power, internet, cell service, it was the perfect place to recuperate. There was a rocky beach just across the road, that I went and hung out at one afternoon. I also went to Yasodhara Ashram for lunch one day and to visit the grounds…looking for possibilities. I wasn’t able to see the temple as it was still under construction, but I sat and did a meditation in the beach cottage which was very peaceful. I signed up for 30 minutes, ended up omming for an hour…..
timeless meditations…the best!!
Lunch was eaten in complete silence – unexpected –
I left my postcards, portfolio and contact info with a volunteer to pass on to the person in charge, but in truth what I saw wasn’t drawing me, except maybe something around the beach – we’ll see what happens  –

I left Grey Creek on Monday morning, feeling ready to move on, Castlegar being an eventual destination. The ferry ride to Balfour Bay was exquisite – the longest free ferry in Canada – Out in the wide open space of the lake you could really see the pervasiveness of the smoke, the valley had been filling up with it all week long, getting progressively worse, the smell was very strong, visibility was limited.
I had seen Woodbury’s RV resort advertise water craft for rent, so I headed there when I disembarked, hoping to be able to kayak or SUP. But as it turned out, they only rented motor boats. Once again, not a great campground, although I had a beach front spot, neighbours were very close, and between the gnats and the smoke and the dust, being outside was not very pleasant. I browsed my camping app and found a provincial campground just south of Balfour bay, that rented kayaks and SUP’s, so I made a reservation for the next night.
Stopping at Ainsworth Hot springs the next day was a glorious idea! Breathing all that wonderful steam and the warm healing water on the body before continuing on the drive was perfect. I loved it!
After Ainsworth I stopped at a roadside café just outside of Balfour bay, spoke with a french Canadian guy, a longer than usual conversation, he was very chatty – as it turned out it was just long enough for me not to be involved in a car accident – less than 20 cars ahead of me!  Blessed!
Kokanee Provincial park was beautiful. Large parking spots, lots of space between guests divided by tall shrubs, lots of trees, close to the water – so I decided to stay for 2 nights even though there was no power, no water, no internet, limited cell service. I had enough propane and water to last a couple of nights.
After checking in and getting my bearings, I went for a hike through the grass lands, watched the Kokannee going upstream to spawn, sat on the beach, beautiful white sand, warm water, sunshine masked by smoke – I just sat and watched everything and everyone – drinking it all in, absorbing it – nothing interfering with just ‘BE’ ing –

August 30th 2017   I wrote:
I feel curiously silent – even in my head – especially in my head – not particularly chatty, feeling very unplugged – pas interessée – but also not feeling very retrospective – in spite of the silence – silence is enough – maybe it is everything!
Feeling open – well maybe what would be more accurate is that I’m feeling the opening happen – small breaths at a time – watching – witnessing – curious  –

I spent the next morning Kayaking, it was stellar! Bald eagles, parents and juveniles, osprey, herons, dozens of them all going to the creek to feed.
I was so happy to have found this place, grateful to be a witness to such magnificence!
I weep!!! 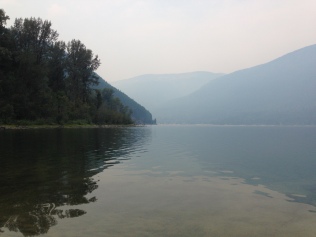 Sept. 5th
When I arrived in Castlegar it was the first clear blue sky I had seen since arriving in BC. The first thing I did was stop at my friends property just outside of town to see what the possibilities looked like for an installation on their land. The weeds were knee high and dry as a bone, crispy and golden – the blankness of the space would give me a lot of freedom. I came up with some ideas, then made my way down the mountain and drove to Castelgar Golf and RV resort, east of town, away from the hiway, train tracks, and city lights. Your neighbours were close to you , but there was reliable internet, water, power, showers, all in a beautiful setting, surrounded by green grass – the first green grass I’d seen in a long time.  I hadn’t thought of a golf course to put up an installation, but this one was beautiful. I could see the piece under the large cedars, along the hills, against the greens…I decided to ask about the possibility, knowing that it would be a long shot!!!!  They said no, but I think I will pursue the golf course idea, maybe somewhere else.

I had it in mind to create a full moon piece on Sept. 6th, a week away. The eerie orange glow of the fire moon could be amazing.  I began imagining what I would do as I worked diligently creating, writing/editing  my blog/website, as well as replenishing my inventory of ‘hai’ lights.