Posted by Louise on November 26, 2017 in Uncategorized |One Comment

August 20th
I arrived at my chosen location on Castle Mountain around 12:30p, walked the terrain, modified my original idea, scaled it down somewhat so it wouldn’t get lost in the vast space. Instead of the spiral that I had originally envisioned, I decided to put the pieces in the burnt out stumps scattered throughout the plateau. A few curious people slowed down as they drove past and a ranger from Pincher creek stopped and came by to speak with me.
I continued to work until after 5p, got down from the mountain and to the campground by 7:30 – exhausted!! I had some difficulty with the camera/cord connection so  the battery pack was completely depleted, as well as all the other equipment. I will have to make sure that doesn’t happen tomorrow. I plugged everything in, was in bed and asleep by 10p…….looking forward to seeing what happens tomorrow! 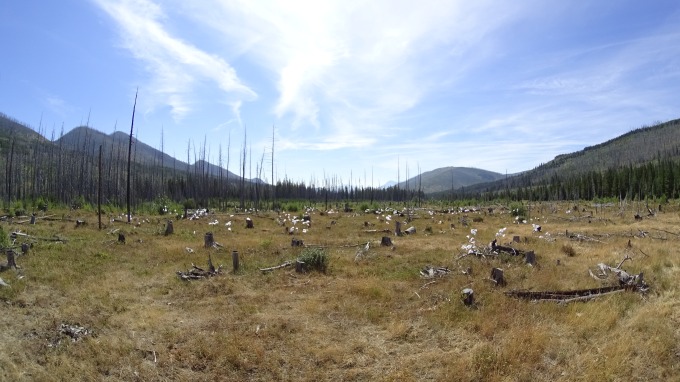 August 21st
I had set the alarm for 6a – was up by 6:30, on the road by 7:30, and on the mountain by 8:45 – the pieces were quite damp from the dew, a little wimpy, there was absolutely no wind, almost no clouds. I set up the action cam to take time-lapse photos, secured everything in case the wind showed up, then sat down in my chair to watch, to just ‘be’ in the space.
I wanted to say that the silence was startling, but in fact the more I tuned into the silence the more the space filled with the sound of buzzing bees, and flies, crickets and squirrels, ravens and songbirds – it was amazing!
I was alone on the mountain as far as I could tell. The campers/fishermen from the weekend had vacated, not one single vehicle drove by.
It didn’t really get dark during the eclipse, it was more like a cloud passed over the sun, it looked more like twilight, and it got very cold. I had to get another t-shirt and wrapped myself in my shawl.
I started taking stills and video with the iPad just after the peak around 11:30a, and took down the action cam around 12:30p, so I could get some overhead shots. When my arm got tired I put the monopod down. I can’t remember how it happened exactly but the camera ended up upside down. I noticed when I happened to glance at my iPad. What I saw was an amazing view that I would not have seen otherwise. I loved the perspective, so I started to shoot everything upside down. I couldn’t wait to see how they turned out.  I was done by 2p, so once again everything came down. 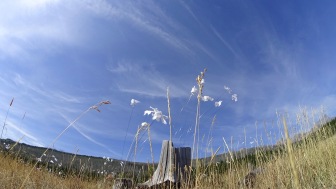 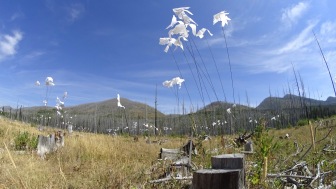 I bonged my bowl in gratitude then slowly made my way down the mountain, spotting a moose…on the loose…beautiful, majestic 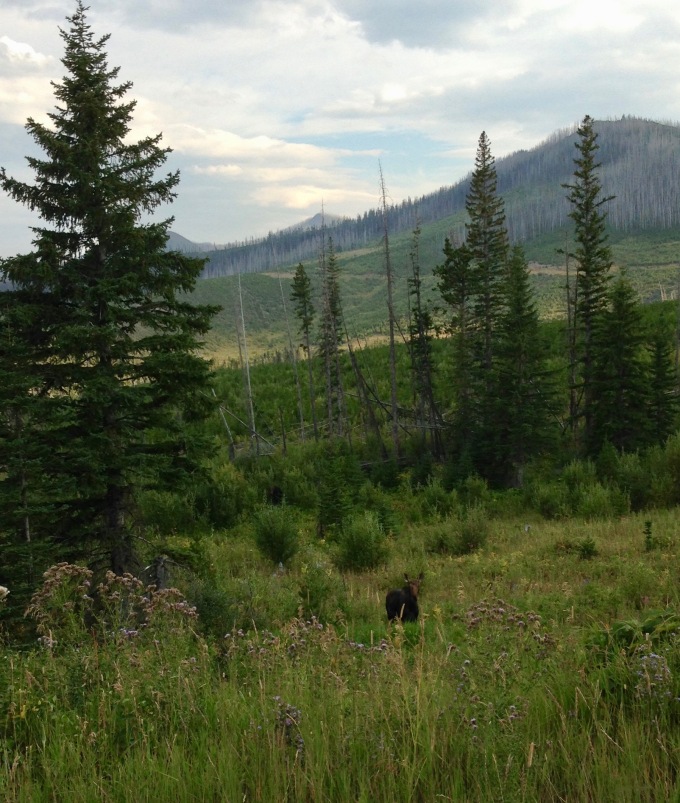 I stopped at the RV car wash before going back to the campground. When I got back, I cleaned the van – so much dust! did laundry, had a shower, Shepard’s pie for dinner, dwnld everything to the computer, backed it up. It wasn’t until after 9p that I actually got to see what I had shot –
I had felt somewhat disappointed not only with the seemingly uneventful event, but also with the piece – it wasn’t quite what I expected somehow – everything was feeling very anti-climatic. I went into self-doubt, criticizing mode – ‘what am I doing this for?’ ….
and then I looked at the footage and was blown away with what I saw – what the camera picked up – the upside down photos/video were brilliant  – so beautiful – I wept!
I’m always so quick to judge and criticize not just the work but me as well!
Time to learn some self compassion!

August 22nd
Woke up to another glorious day.  I spent it at the RV place, the tire shop, tourist information connecting to wifi, calling friends who I’m hoping to connect with in the Kooteneys, checked directions to Yasodhara ashram for a possible visit to their temple of light, Melted, stretched, exercised on the picnic table – so needed –
Got up early Wednesday morning to catch up on journal writing, had B/F and then stretched a bit before leaving, heading towards Cranbrook.
This cold continues to linger in my head and sinuses, and exhaustion seems to have become a constant companion.