every driving day a different colour

I left Empress after packing everything up and headed south towards Sceptre, taking the long way around to avoid gravel roads as much as possible. The museum was closed again, so I drove straight out to the dunes, thinking it was so hot there wouldn’t be many people…wrong… 8 cars and trucks, kids tobogganing down the hill, people having lunch….so I decided to go into Leader to check out the campground, that way I would know where I was going when I finished the installation.
On the way  into town a rock hit the edge of my windshield beginning a crack that would interfere with my vision if it kept going. I was so upset, every time I hit another bump or rough patch in the road it would get bigger. I decided to put duct tape at the ends of the crack…hoping it would hold until I could get it repaired tomorrow, and then tried to calm myself down, it was only a cracked windshield!
When I got back to the dunes, there were even more people than before. I found a place with some shade and parked Bill, brought out my chair and sat outside reading, waiting for the crowd to thin out.
By 6:30 almost everyone had left, so I picked a suitable spot and started planting pieces, following the patterns of the shifting sand and the lines of the earth. I spread them out quite a bit, maybe too much in retrospect. A curious young couple travelling to the Yukon came by and engaged in a conversation. By the time I was finished photographing everything it was almost 10p. When I got back to the parking lot, two other cars had decided to stay and car camp to catch the sunrise, so I decided to stay as well, it was too late to take everything down, and drive into town. I wouldn’t be alone, so it was all good! I had a bowl of cereal for dinner, cranked up the propane and fell asleep, too tired to even review what I had shot!

June 26th
I was up and on the hill by 5:20a. It was a beautiful sunrise, but super cold. I was wearing all my wool gear. There were deer and bear tracks in the sand, bird and beetle tracks, and some other mysterious tracks to be sure. ( This is one of those instances where having an overnight time-lapse would have been fascinating! ) I shot video for just over an hour, then took the piece down, had some B/F, packed everything up and then drove very slowly into town to have the windshield repaired. I waited at the Leader hotel – had a coffee on the house and checked email while listening to a table of farmers talk about everything from prostate cancer to marijuana legislation…
ah to be a fly on the wall….. invisible in the corner of the room!!!
The cost of repair ….$65 and less than an hours time!
I was  grateful that my vision wouldn’t be obstructed, the guy did an awesome job! 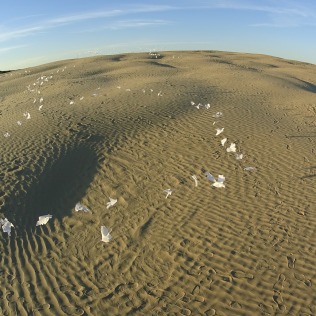 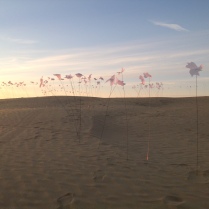 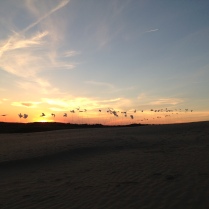 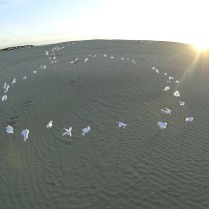 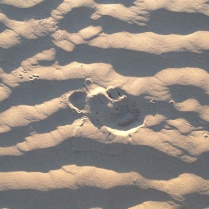 On the road again by 10a, happy to be driving surrounded by green fields, I’m blown away, not just by the wind, but by the sheer beauty of it all –
I stop to take photos and weep…impossible to capture the immenseness of it all – basically I’m standing in the middle of your salad bowl, your dinner plate, your breakfast cereal, and toast…and what it takes to get it from here, the fields, to there, our homes…
it’s pretty amazing, enough to blow anyone away!

Surrounded by an ocean of green

The rest of the day went something like this: got lost in Medicine Hat, filled up with gas, got lost in Redcliff looking for the 525, found the Cucumber Man, bought some fresh greens, got directions from the cashier at the CO-OP, found the 525, busy and barren, eventually stopped in Vauxhall for the night. The campground was just off hi way 36, Veteran’s Way, a N/S trucking route, definitely not quiet, but well maintained, free showers, friendly hosts. I spent time cleaning all the sand out of the RV, backing up my equipment, made a green juice, lamb burger and new potatoes for dinner. Afterwards I got caught up on some writing.
Today I’ve been on the road for a week, 6 days ago I was sitting on top of Mud Butte waiting for the wind to stop – hard to imagine, seems longer than a week!

June 27th
Finally fell asleep when the traffic died down around 3a. I wasn’t driving far today, but I didn’t really know where I was going. I just had some vague directions from Marv, and an inadequate grid map. I got lost a lot looking for back roads that would take me away from all the traffic. Southern AB is very busy, lots of agri trucks, big industry farming, super smelly! I stopped in Picture Butte for a break and decided to have lunch at a restaurant. I ordered a caesar salad, a 10″ no tomato shrimp pizza and devoured everything except one slice. I couldn’t believe how hungry I was! I also checked wifi, email messages and road maps so that tomorrow I would know exactly where I was going. I was able to find photos of the road on google!
After I got settled at Carmanguay campground, I napped from 3:30 – 6p, beyond tired!
I could not move! When I woke up I got everything ready for an early start tomorrow, had dinner, read, did some writing and then bed.

June 28th
I was up and on the road before 9a, and at Sundial Medicine wheel by 10:30a. I couldn’t believe how close I was yesterday, I just didn’t know it. It was a very nerve-wracking drive on a gravel road, then a farmer’s field, cows roaming, huge boulders and very uneven ground. Once I got to the top of the butte, I decided I would make a piece right then and there, I wasn’t keen to have to make that drive again. I was there, had pieces ready, equipment powered up, the sky looked clear for now,  so why not?
It was quite difficult to put pieces into the ground, it was mostly rock, so I decided to just focus on the middle of the wheel, where people had left medicine bundles and prayers. I rang my bell, set my intention for the piece and then proceeded to plant ‘hai’ lights.
The wind was picking up and clouds loomed on the horizon. I did not want to get stuck there in the middle of a storm. I had everything up, filmed, and down by 2:30p. Some visitors showed up at one point, a geologist from Calgary and some of his friends, touring the area for the day. I let them explore the space while I went and had something to eat. When they left, I took down the piece and then got ready to leave for Little Bow Provincial Park, where I had decided to spend the night before heading back to Calgary. 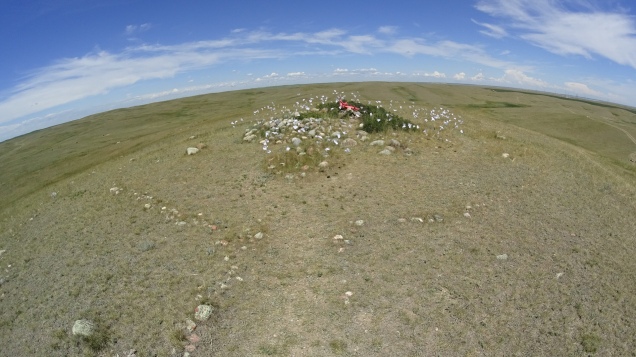 June 30th          Back in Calgary
My night at Little Bow was stormy, I was glad to be in a safe and secluded place, even if there wasn’t any wifi or cell reception. It gave me a chance to check my video footage from the last 2 installations.
I made it back to Calgary yesterday, June 29th, a more or less easy drive into town, but long weekend traffic was already starting . Beautiful, fresh air, light breeze, blue sky.
I drove straight into Strathmore, to the truck wash place that I went to earlier in June, and gave Bill a much-needed cleaning. Then it was basically Country Hills Blvd all the way home. It felt easy this time compared to 6 weeks ago.
I’ve become accustomed to Bill and he to me – horse and rider are one!
It actually feels good to stop moving , and to have space, especially to stretch /exercise – to have time to process everything, so much stuff, so much learning, so many levels –
Looking forward to hooking up to reliable technology, seeing my work on the big screen, getting my blog started, and spending time in the garden –